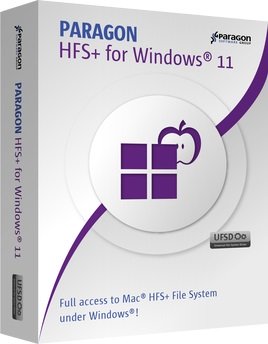 HFS+ is one of the primary file systems of macOS. If you work on Windows computer and need to read or write files from HDD, SSD or flash drive formatted under macOS, you need HFS+ for Windows by Paragon Software.

Stable Operation
Fail-safe operability across compatible hardware and software systems for both general-purpose and specialized applications.

Efficient Use
Thrifty usage of processor, memory, and disk resources.

Write Access
When a volume is mounted in write mode, you can do everything with files and folders it contains: read, edit, delete, rename, create new.

Automount
HFS+ for Windows by Paragon Software mounts supported volumes automatically at startup, so you don't need to bother about it each time you restart the operating system or power your computer on. However, this feature can be disabled at any moment in the program interface.

[/b]Internationalization
HFS+ for Windows by Paragon Software supports all alphabets supported by your operating systems, including those that use non-Roman and non-Latin characters, so you will never face a problem of not getting access to file names on volumes mounted in non-native OS.

[b]Support for journaling
HFS+ for Windows by Paragon Software supports native HFS+ journaling, thus ensuring that in case of any failure the disk file system is not irreversibly corrupted and can be put back on track easily.

Compatible with 3rd party software
HFS+ for Windows by Paragon Software is compatible with popular virtualization and encryption applications including VMware Fusion and Workstation, Parallels Desktop, TrueCrypt and its forks.

RELEASE NOTES:
- Release notes were unavailable when this listing was updated.